Things fell into place at Tecumseh and it was a breeze at Skydive Ft Wayne, would it be possible that our luck would hold out at Skydive Chicago?  While we were driving, Matt pulled up the Skydive Chicago website.  He could actually look to see if loads were still going up.  We were in luck!  The plane was still flying and we even saw a familiar name…Adam Laird!  I drove as fast as I could without getting a ticket.  We had one traffic incident right around the city, but the backup didn’t last long.  When we got there, we saw jumpers landing.  Matt went inside to see if they were still jumping.  Sunset was 90 minutes out - plenty of time for another load.  He called me to tell me that I needed to come in and fill out waivers.  I was hopeful that we’d be on the next load and rushed inside.

So…Start Skydiving may have the largest hangar with the biggest packing area, but Skydive Chicago is fun jumper heaven!  Lots of indoor bathrooms, a restaurant, a huge gear shop, and don’t get me started on the other things the drop zone has to offer.  In my travels, I’ve been to some of the largest drop zones in the United States, Eloy, Perris, Z-hills, Deland, but not one of them holds a candle to Skydive Chicago.  It really is the best fun jumper facility that I have ever seen – with the exception of the packing area.  It did not have the largest packing area.  I could elaborate, but you can find out more on their website!

As I entered manifest, I saw Matt talking to the girl behind the counter.  She really seemed slow moving and we were anxious.  Could we get Illinois today?  She took our waivers, checked out our rigs and put us on a load.  That seemed very hopeful.  Then, she told us that we needed to have 11 jumpers to make the plane turn and suggested that we try to find people before they started driving beer.  They had already done 15 loads for the day.  We asked if Adam was around and she told us that he had already started drinking.  Oh oh!  The one person that we actually knew!  Crapola!  A gentleman entered manifest and we asked him if he would jump again and he said yes as did the next person we asked.  Unfortunately, they were both organizers and jump for FREE!  They didn’t count toward the total of jumpers needed to make the plane fly.

Before we left manifest, the women behind the counter gave us a drop zone briefing.  I felt like she thought we were idiots.  The briefing was far more extensive than the one we got in Delaware…that’s for sure!  She covered every possible question we might have and a few that we would have never even thought to ask.  She was…thorough.  I want to say annoying, but really we were just over anxious and extremely tired.  She was doing her job with 100% commitment to detail!

A bunch of people were in the hangar and we walked around trying to encourage them to jump again.  A few of them agreed to go and went into manifest to sign up.  I was frustrated.  If we could get Illinois out of the way, we could definitely head up to Wisconsin for Saturday.   I spent some time talking to the pilot.  Needless to say, he wasn’t thrilled that he couldn’t start drinking.  The pilot has to wait until we know for sure we won’t be putting up the load.  We were really just an annoyance to him.  He wanted to kick back and relax.  Manifest put the plane on a call, but announced that we still needed six jumpers.  One of the locals walked over to the people packing and asked if they were planning to jump.  They said they were so he told them to go in and manifest so we could see if we had enough people for the load. 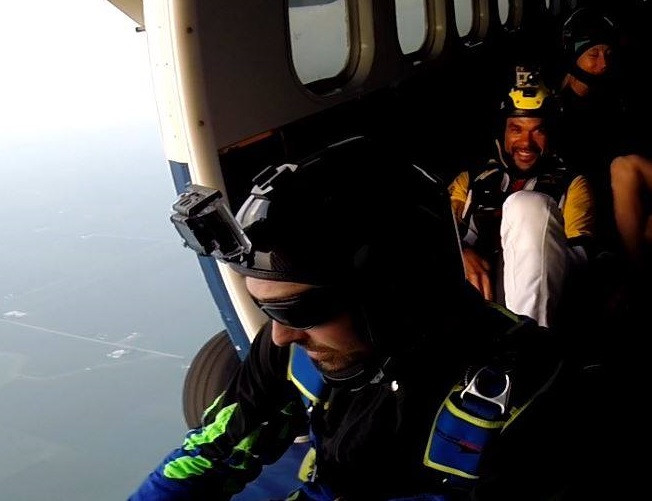 And just like that…it was a go!  OMG!!!!! So very awesome!  I geared up early and hung out with the pilot while we were waiting for the others.  I thanked him again and apologized for the delay in his social activities.  He said it wasn’t a big deal.  Three drop zones in three states in one day – I just couldn’t stop smiling!  When we were climbing to altitude, the pilot forgot that we were doing low passes.  This seems to be a very common thing with pilots.  I guess they get in their zone and just want to keep climbing.  Someone let him know and he made a quick turn and headed back to the dz.  My camera was acting a little wonky.  I’m not sure how it got reset, but I was getting only video.  Of course, video is better than NOTHING!

When I left the plane, it felt amazing.  Was I tired?  Oh yes…hell yes! But it was completely worth it to be able to say that we jumped all three states in one day!  I made sure to look down at the runway.  They have SKYDIVE CHICAGO written on it.  Very cool!  I set up to land in the peas, but as I approached them I noticed a flock of birds.  Based on the peas at Orange which seem to attract large bird poo, I elected to land next to the peas instead!

It had been a long day, but it was a cool evening.  Packing our rigs didn’t take too long.  I looked around the hangar and noticed the freefly organizer putting away his stuff.  I asked him to sign our log books.  I told him about our quest to skydive in every state and that I would soon have a website and would be certain to mention our positive experience.  He said, “I have a website too,” and handed me a brochure for it.  His name is PJ Jackson and he had nearly 10,000 skydives over 15 years.  His company is “Supafly Skydiving” and they offer coaching and load organizing.  After glancing at his brochure, I told him that my website will never be as bad ass as his.  By the way, PJ is the guy on the plane smiling in the picture - he was laughing to me for the way I asked if  my camera is on.

MICHIGAN – INDIANA – ILLINOIS all in one day!

It seemed like that wonderful breakfast at the City Lights Pancake house happened so long ago.  I was starving.  We powered through packing and went over to the bar to get some food.  They were having burgers on a pretzel bun, Mac & Cheese and salad for $8.00 each.  I really wasn’t expecting much, but the burgers were perfect and the salad was so yummy.  The Mac & Cheese wasn’t so great, but I am comparing it to mine which is a family favorite.  While we were at the bar, we talked to a few of the locals, but Adam never showed up.

We ate at a picnic table, cleaned up our mess and then went to the car to figure out our next move.  It was still sort of early – just after 8:00 PM local time.  It would have been nice to go back to the bar and have a few drinks, but that really didn’t fit in with our goals.  It was only Friday night and we had already completed 4 states!  How many more could we get on this trip?

Matt found two drop zones in Wisconsin.  The first one only 100 miles away and there was a second one just another 40 miles out.  It was worth a try!