On Friday evening, I dropped Price off in Woodbridge and was back home before 9:00 PM. Since we didn't have plans for Saturday, we stayed up late and watched a movie. Of course, I woke up at normal time on Saturday.  After we checked the weather, we decide to head over to CrouchFest for the day.  We managed to leave the house before 10.

On the way to VSC, I told Matt that he could use my rig to do a couple of extra jumps.  I was feeling a little guilty because I've been racking up the jumps while Matt was busy working - PLUS...I was tired.  Matt was only six jumps away from 1,200!  As soon as we got to VSC, he put himself on a load with Carol and the other belly flyers.  Roger Ponce was organizing big ways and Matt was excited about doing them.  He went off to do his thing.

While I was getting ready, I saw Amy Redwine! When I left TSC, I promised Amy a Pink Mafia do over. Another woman from Amy's home DZ asked if she could come along too. Perfect. On my first jump of the day, I took Amy and Whitney and one of our friends, Bill, came along with us to shoot video.  Look at Whitney's smile.  It's awesome!

When we landed, Matt was getting ready to do a hula-hoop jump  I was so jealous!  I wish I had better timing - I would have loved to come along. Oh well...maybe next time! Since I wasn't in a rush, I took my time packing.  My only goal for the day was to do Matt's 1,200th.  However, he wasn't making as much progress as he had hoped.

My second jump of the day was another Pink Mafia initiation jump with two of the women from the hula-hoop jump - Andrea & Hillary.  Bill came along again to shoot video.  Another super fun jump and two more initiations! 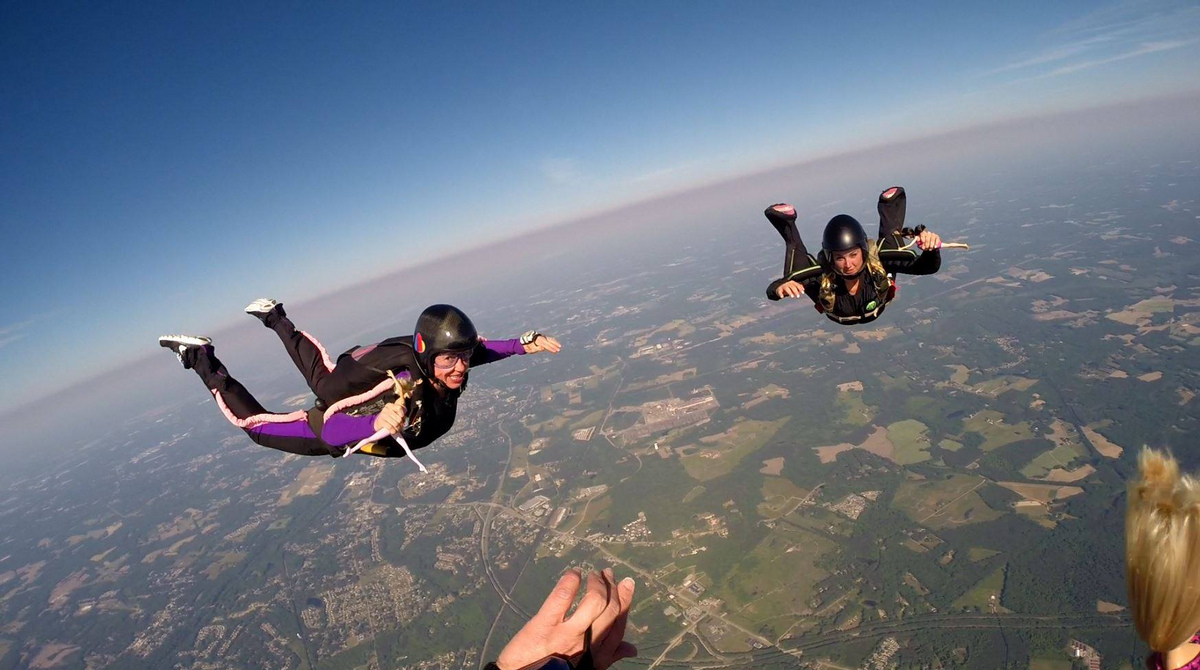 At some point during the day, Jim had the experienced skydivers get together. He had two awards to give Carolyn Clay. The first award was her 18,000 jump wings certificate and pin. Carolyn was the 17th person to receive this award.

The second award was her 300 Hour Freefall Badge.  Carolyn was the 9th person to receive this award.  Congratulations to Carolyn on these remarkable achievements!

Wow...That's an average of roughly 400 jumps per year! Very impressive! VSC is lucky to have this amazing woman at their drop zone.

When Matt finished jumping for the day, he was at 1,198.  Just two more! We packed up our things and headed over to the camp ground for dinner.

While we were waiting, we watched the pond swoopers as the sun was setting.  It was a great way to end a wonderful day.  Thank you VSC for a yummy dinner, fun jumps, and great company!