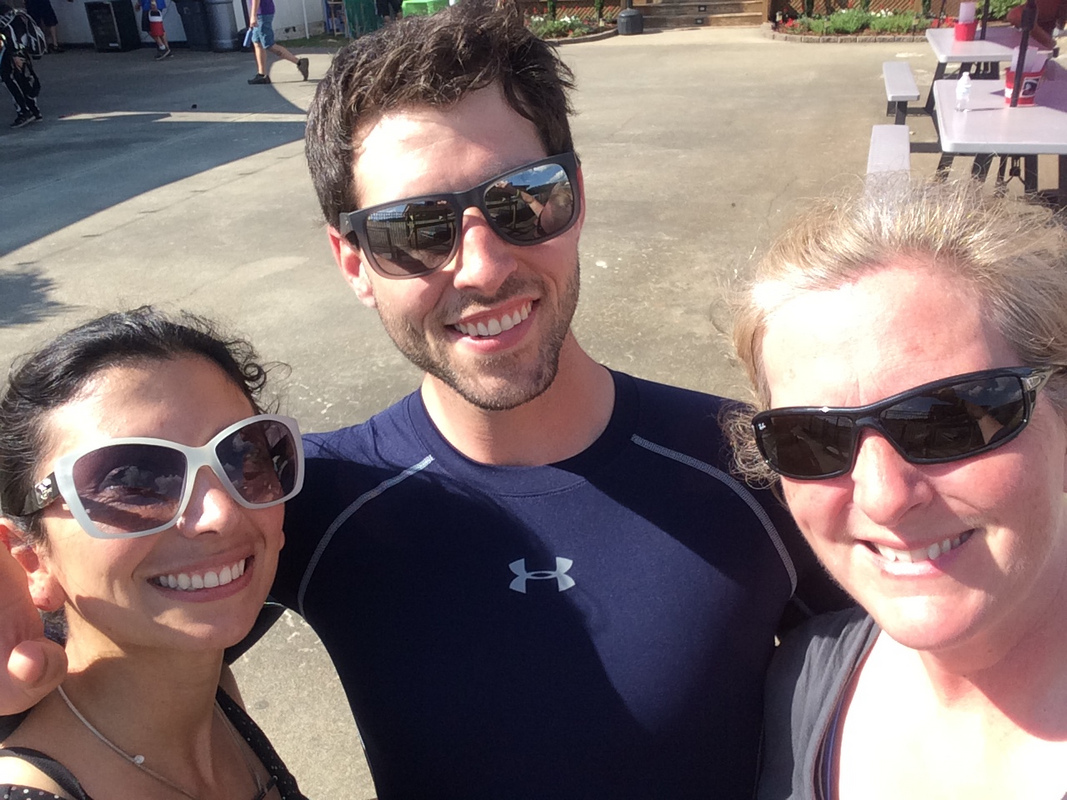 When I woke up on Friday morning, it was very early. The free loads hadn't gone up yet, but I used my time to get a long hot shower and to grab breakfast! When I got back to the DZ, they were still putting up the free loads.

Debbie had been on free load one and commented that it was a great way to start her birthday.  OMG...I completely forgot her birthday.  Last year, I made cupcakes and this year I forgot.  I felt like such a bad friend!  Not that it makes a difference, but I had so much happening in May that some things fell through the cracks.  I hope I don't get fired as a friend!

On the way to the plane for my first jump, I stopped at the Cookie booth to talk to their rep - Nick Grillet.  He introduced himself and I did too.  I told him that we met many years ago at one of the Orange Boogies.  No worries - I am sure he meets a ton of people every year.  Nick suggested that I stop back and try on a helmet after my jump.  Before I left, I mentioned that I'm friends with Merriah - she speaks very fondly of him. Nick said he and Merriah go way back. 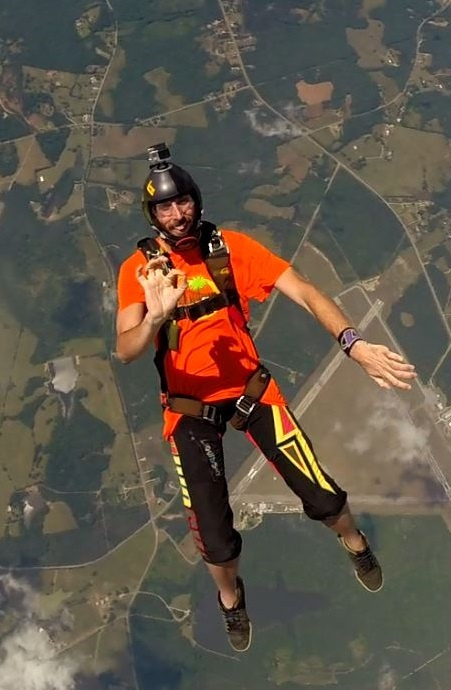 Over the course of the day, I managed to do 4 jumps. I did another beginner angle/tracking jump with Ryan and was excited because I got to jump with Brian. Matt and I met Brian at Skydive Deep Creek last summer and I did a hybrid with him and one of the Deep Creek locals.

Next was a beginner angle with Luis Prinetto, and two freefly jumps with newbies - Jordan & Josh. The highlight of the day for me was the "okay" sign I got from Luis when we left the plane (I think he was sticking his tongue out at me???).

Debbie was excited about jumping with Luis, but I had never even heard of him.  It turns out - he's kind of a skydiving rock star! After I did my jump with Luis, I went to talk to him. He said I had a good body position, but I need to extend my legs more so I would go faster.

Next stop:  vendor tents!  It was very important that I keep my promise to Matt. A bunch of different vendors were there with samples of jump suits.  I started out with Vertical Suits and talked to their rep, Brad.  He was very knowledgeable, but he recommended that Matt come down to see what sort of products were being sold (by VS as well as other vendors) and to be measured.

I popped over to the Cookie tent and Nick introduced himself AGAIN.  Hmmm...I was surprised, but I figured that maybe he didn't recognize me without my gear.  I tried on the new helmets.  They are so comfortable.  I fell in love with the lime green helmet, but I know that it would look ridiculous with my gear.  If the magic gear fairy came tomorrow, all my gear would be neon blue, neon green and black (not that I don't love my gear - I do!).

When I got back to the hangar, I couldn't find anyone to jump with, but I wanted to keep going. I went to the King Air manifest window and gave my ticket to the girl.  I told her that I was a pathetic skydiver with no friends.  She nicely assured me that I am not pathetic and put me on the next load. When I asked to use her pen and then wrote KA 13 to the list on my hand, she smiled (she was probably reconsidering my level of patheticness). Oh well...it was the best way for me to keep track the planes and load numbers.  I'd already been on the Red Otter and the Teal Otter - I didn't want to get on the wrong plane. 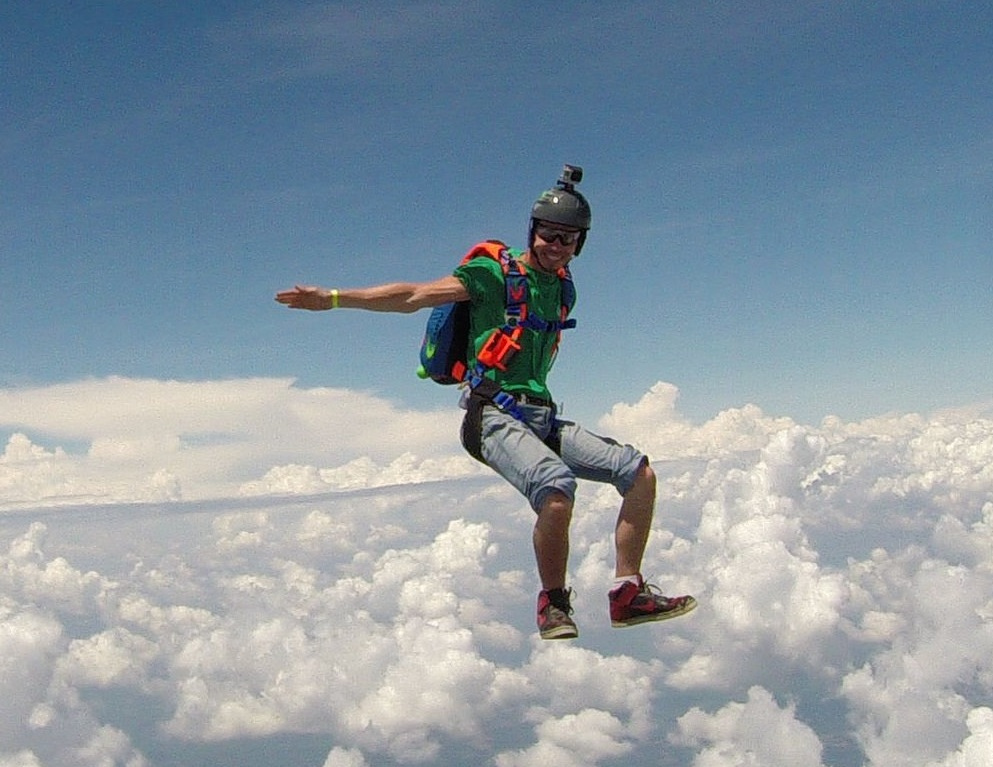 At the 10 minute call, I went out to the loading area to see if I could find someone to jump with me. When I got there, I saw Jordan standing near the benches.  He was from Brian's home drop zone in Pennsylvania.

Jordan was planning to freefly with a friend and I asked if I could tag along.  I was happy when he said yes. He noticed the writing on my hand and we laughed about it.

When it was time to board the plane, Jordan's friend was no where to be found - maybe his friend should have written the plane and load number on his hand!

Shortly after we landed, Jordan came to tell me that he had gotten on the wrong load!  Yikes!  I showed him my hand with a new plane and load number.  He asked if he could borrow my pen and wrote 21 on his hand next to his tattoo - Big Smile!

While I was jumping, Matt texted me and asked that I verify the Vertical Suits rep would be at the DZ rain or shine. When I got back to the VS tent, Brad was talking to Nick. Who introduced himself AGAIN.  I was like what???? Seriously????  You just met me twice like an hour ago. I am still not sure rather or not he was messing with me or if maybe he is related to "10 second Tom".

Brad confirmed that he would be around all weekend - rain or shine.  Good news for Matt! As I walked back to the hangar, I looked at my phone.  It was already 3:30 and my time to jump was running out. I ran into Josh - the packer I used at the TSC SIS event.  He was just standing around doing nothing.  So, I offered to go with him on a beginner freefly jump.  The jump was a bit of a mess, but no worries - this is how we learn. 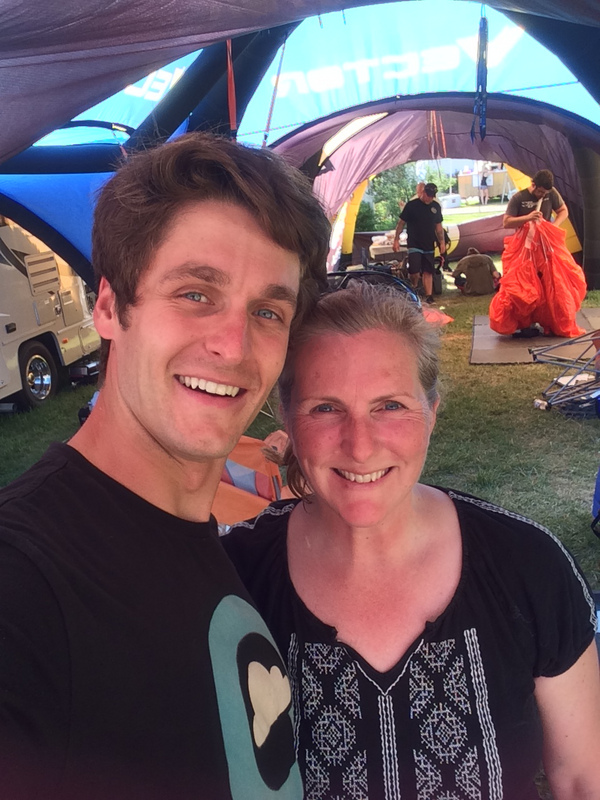 I packed my rig and loaded the car and was ready to pull out at 4:45.  Then, I realized there was no way I could drive the 5 hours to get home without a quick shower!  Since everyone was still jumping, it was the perfect time for a shower! It felt so good!

As soon as I was in the car, I cranked up the air conditioner and I looked around to make sure I had everything. Looked good to me. It was just after five when I pulled out of the Skydive Carolina parking lot.  I didn't make it very far before I turned around because I realized that Merriah might enjoy having a picture of me and Nick together.

Back to the drop zone, parked the car and sprinted down the gravel path to the Cookie tent. As I approached Nick, I put out my hand, "Hi, I'm Sarah.".  He smiled and replied, "I'm Nick."  I quickly explained that I wanted a picture for Merriah and viola!  Here we are.

I am thankful that Matt encouraged me to go to CarolinaFest 2015 and I can't wait to come back next year with him!