Thursday at CarolinaFest was pretty spectacular!  There were 15 organizers on the schedule willing to work with varying skill levels. I was very interested in working on tracking & beginner angle so I went to manifest and asked who they would recommend.  They told me that I should find Kyle Sutton - he was wearing red and black and had a face tatt.  As I turned around to leave manifest, I found no less than seven people wearing red and black.  Hmmm....  I walked around the hangar and tried to get a closer look at each one of them.  I wasn't 100% sure what a face tatt was...face tattoo?  Like Mike Tyson?  Of course, Kyle was the last person I approached and he had a tattoo on his chin.

I learned a valuable lesson on Thursday.  When you give your ticket to a load organizer, you should keep jumping while you are waiting.  I'm not sure what time it was when I gave the tickets to Kyle, but it was almost noon when we finally got on the plane.  There were four of us including myself and Doug (from VSC).  The highlight of the jump for me - a thumbs up from Kyle!

Our track was cut short because we had to negotiate the clouds, but I had a super fun time and couldn't wait to give it another try!  However, my next jump was Molly's do-over Pink Mafia initiation jump!

After I packed my rig, we went through the dirt dive.  Rita was also going to be initiated and a couple of guys were coming along to watch.  We were back in the air right around 2:00 PM. I'm not sure exactly what happened on the exit, but we lost Rita right away. I gave Molly her Barbie and waited for Rita to join us.  Once she broke into the round, the fun began!  Put your Barbie in,

Put your Barbie out... 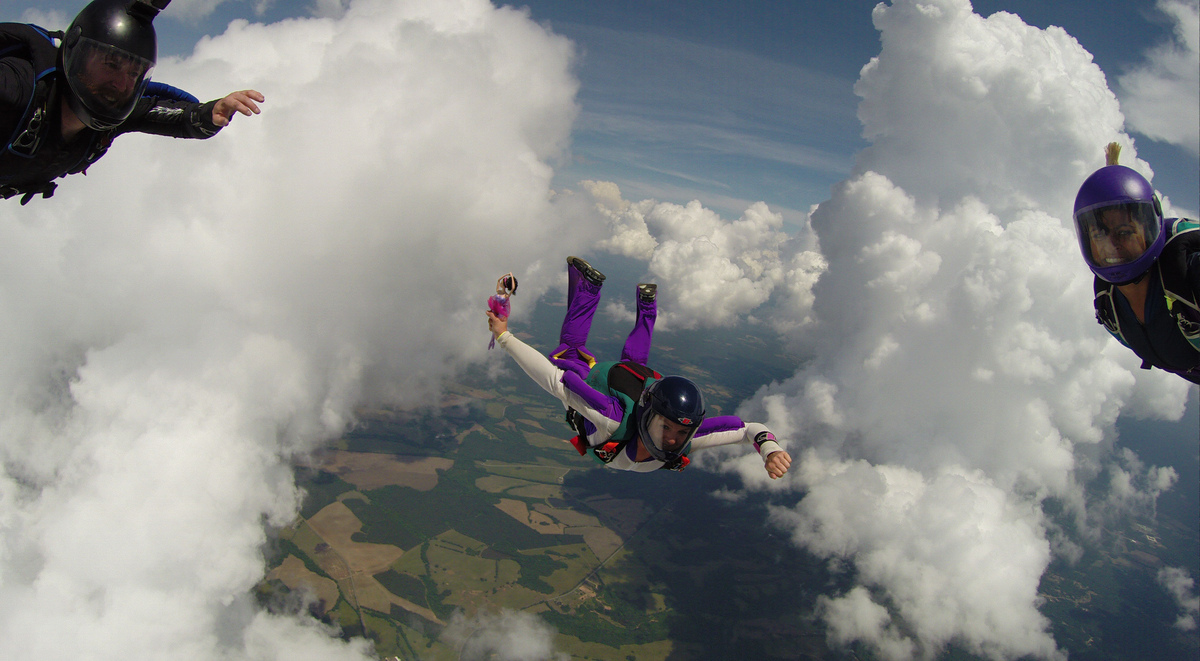 What a super fun jump!  Love the smiles in freefall!  When we landed, Molly still had her Barbie, but Rita had ditched hers because she opened with line twists.  Poor Barbie...she was the first one we've lost.

Things slowed down for awhile because we went on a weather hold.  In the meantime, I found Debbie and one of her team mates.  They were planning to do a tracking jump with Ryan Risberg and I asked if I could come along.  Prior to the jump, I had never heard of him.  The jump was super fun, but I spent a fair amount of the time just keeping track of the other people on the jump. I'm paranoid someone is going to run in to me. In the future, I need to focus on myself and I need to be more aggressive!

My day ended with FREE dinner from Dale's Dive In.  While I was eating, I had a chance to talk to Rose & Wade.  I love listening to them talk about their new baby (the four legged kind) Luna!  She is absolutely adorable. Shortly there after, it started raining and I decided to call it a day.

As I walked back to my car, I was still feeling hungry.  Not surprising since I had skipped lunch.  My day ended with a trip to McDonald's for a small strawberry milkshake.  As I drove away, I realized they gave me a vanilla milkshake.  I'm sensing a common theme on this trip...no fish tacos...no strawberry shakes, but no worries!!!  It had been a great day!  The only thing that could have made it better...Matt!  I missed having him to jump with.