When Sherry asked me to go to CarolinaFest, I was excited because it would give me an opportunity to get to know her better. Unfortunately, things fell through and she couldn't come. Since the registration fee for CarolinaFest is $75, I felt at minimum I should go down and pick up my $75 T-shirt!

My original plan involved leaving on Tuesday, but one thing lead to another and it was getting later in the day...plus the weather didn't look great for Wednesday morning.  I spent most of the day on Tuesday getting the house in order and making sure there were plenty of yummy meals in the fridge. My bed was set up in the back of the van and my bags were packed!

On Wednesday, I got on the road around 2 PM after a nice lunch with Matt.  Along the way, I encountered some construction and a little rush hour back up.  By the time I got to Skydive Carolina, it was almost 8. I checked in at manifest and bought 10 tickets - $260.

Things were winding down for the day.  I ran into a few friends from Orange / VSC and ended up having dinner at a little Mexican restaurant not far away.  Dinner was interesting because I ordered fish tacos and the waitress brought me something completely different (maybe she knew something I didn't know).  Fortunately, it was yummy and it was nice to catch up with Joost, Liz, Byran & Kevin. 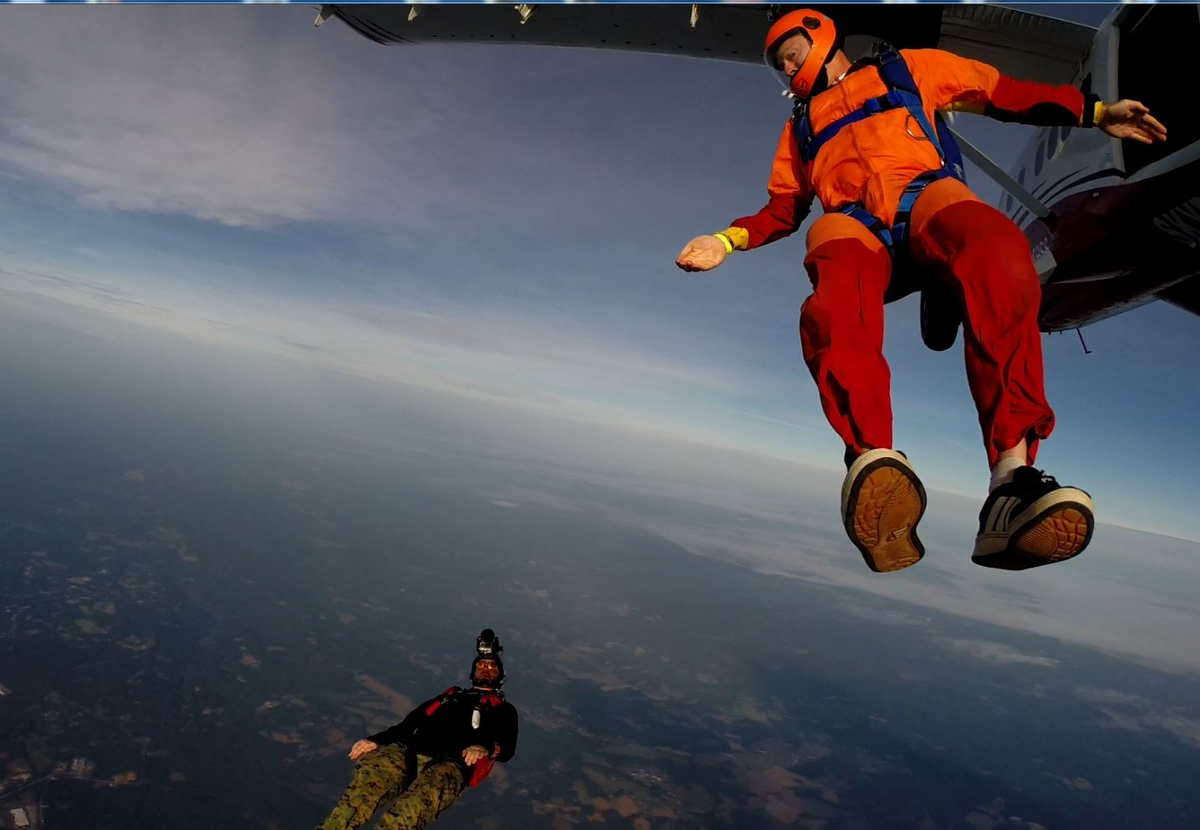 Each morning at CarolinaFest, they offer free loads.  The catch - you have to be up early to take advantage of this offer - start time is 5:45 AM!  Yeah...that's not happening!  It was after 11:30 when I finally drifted off to sleep.

When I woke up in the morning, the sun was still rising.  I got my stuff together and went over to the hangar.  Free load one was just getting ready to board the plane.  I went to manifest and got a ticket for free load 2! I didn't really know anyone on the load, but one of the local videographers (Curt) offered to lead a tracking jump.

Our exit was as close as I would get to Curt.  He was falling pretty fast and I was wearing my baggy freefly suit.  Even though I never managed to catch up with him, it was a great way to start off the boogie! I've really wanted to focus on learning to be a better tracker.

As soon as I landed, I started packing my rig. There was a small possibility that I might be able to hop on another free load.  One of the packers from VSC, Doug, offered to help me finish packing so we could jump together on load 4.  I was a little stressed out about this idea as the plane was on an 8 minute call when I went to manifest to get a free ticket. Doug assured me it would be fine as he raced through my pack job.  He finished just in time to grab his gear and run to the plane.

When we went to board, Doug didn't have his ticket.  He asked me if I had it.  At first, I thought he meant that I was supposed to get a second ticket when I went to manifest, but that wasn't the case. He had a ticket, but misplaced it.  Either way, a ticket was required and he wasn't allowed to board without it. I felt so bad for him that I gave him mine. It only seemed fair because I would have never made it in time without his help. 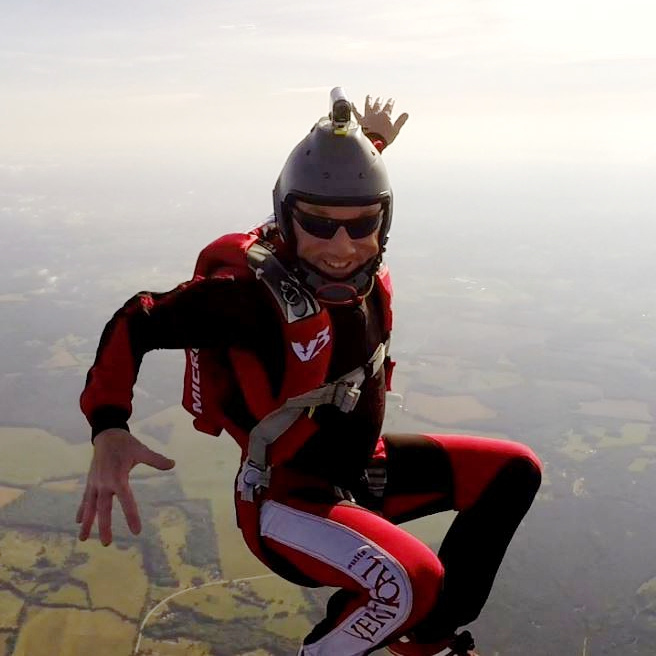 When I got back to the hangar, I went to manifest to get a ticket for free load five. I explained the situation and went to look for the missing ticket. I found it on the floor next to where Doug's gear had been sitting and gave it to the woman at manifest.

While I was waiting for free load five, I met a man named Adrian and we decided to do a freefly jump together.  Adrian had around 850 jumps and a fair amount of tunnel time. Just before we went to get on the plane, I checked the time.

My second free jump of the day was from the Red Otter.  We exited in a sit train and went right into the back flip.  What a fun exit!  We spent most of the jump pretty close together, but I could tell he was struggling a little with my fast fall rate.

When I turned to track, I was surprised to discover how far away we were from the drop zone. Wow!  I pulled a little higher than normal because I didn't want to end up landing in a tree! 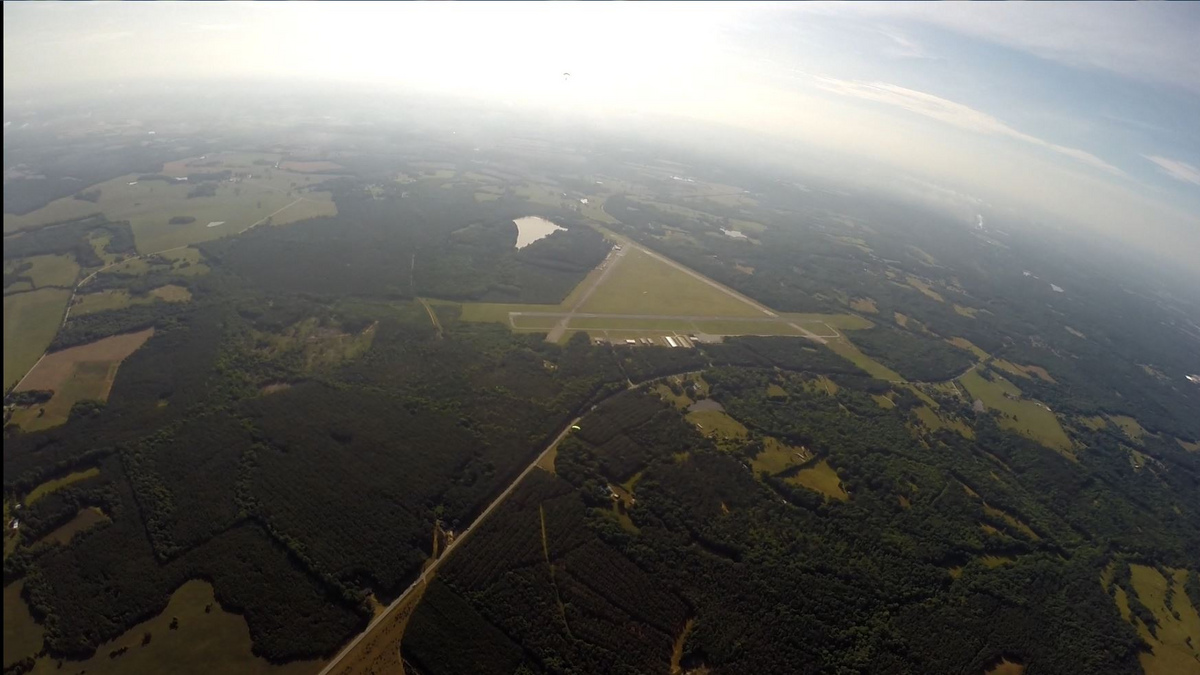 Fortunately, I made it over the trees and back to the main landing area!

My first two jumps at CarolinaFest were awesome!  Two free jumps - two beautiful landings - and it was only 8:30 AM!  YAY!