After my morning shower, I had leftovers from Lemongrass. Super yummy! It was going to be a busy day. Our flight was leaving at 3:14 and we wanted to get to the airport no later than 1:15 so we'd have time to get through security with our rigs.

Our day started with going up to the pool to make reservations for the helicopter and the luau. We didn't have any problems booking the helicopter tour for Monday, April 4th, but we were unable to get the luau we wanted. Instead of the Waikoloa Beach Marriott Resort (just a few miles away), we'd be going to the Island Breeze Luau at the Courtyard Marriott in Kailua-Kona. It was not as convenient, but it was less expensive.

When I got back to the condo, we talked about our plans for the rest of the week. We agreed that a second car would be useful. I made a reservation to get a car on Thursday when we came back from Oahu. We'd keep the car until Sunday evening before the luau. I could drop off the car and they could swing by and pick me up from the airport on the way to Kailua-Kona. I did NOT get very lucky with Big Island car rental. It worked out to just over $62 a day!  Grrrrrr....

In order to ensure we'd be on time for the time share meeting, we left the condo at 9:15. We were so far ahead of schedule that we decided to stop and take some pictures at Honokohau Bay. 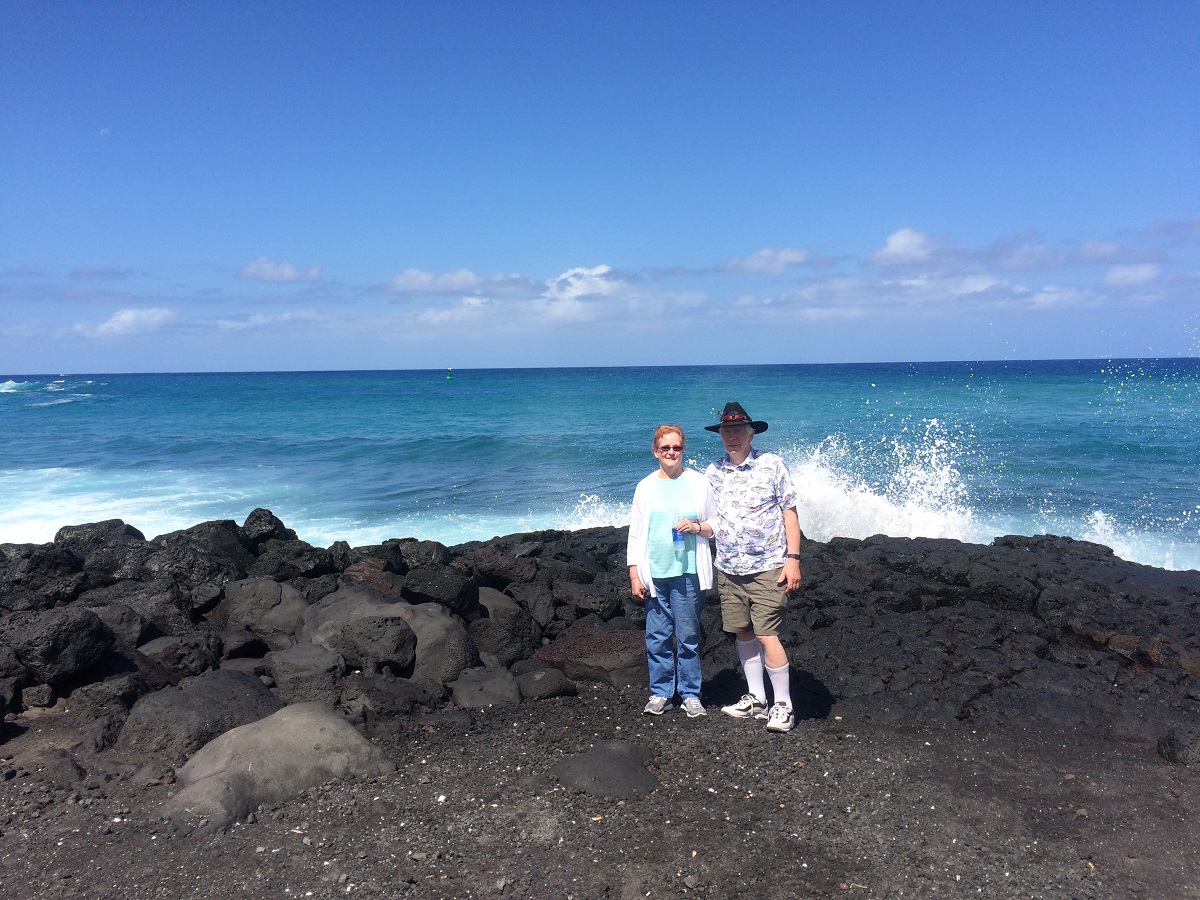 We were trying to time the pictures just right. I think the one of Matt is awesome! 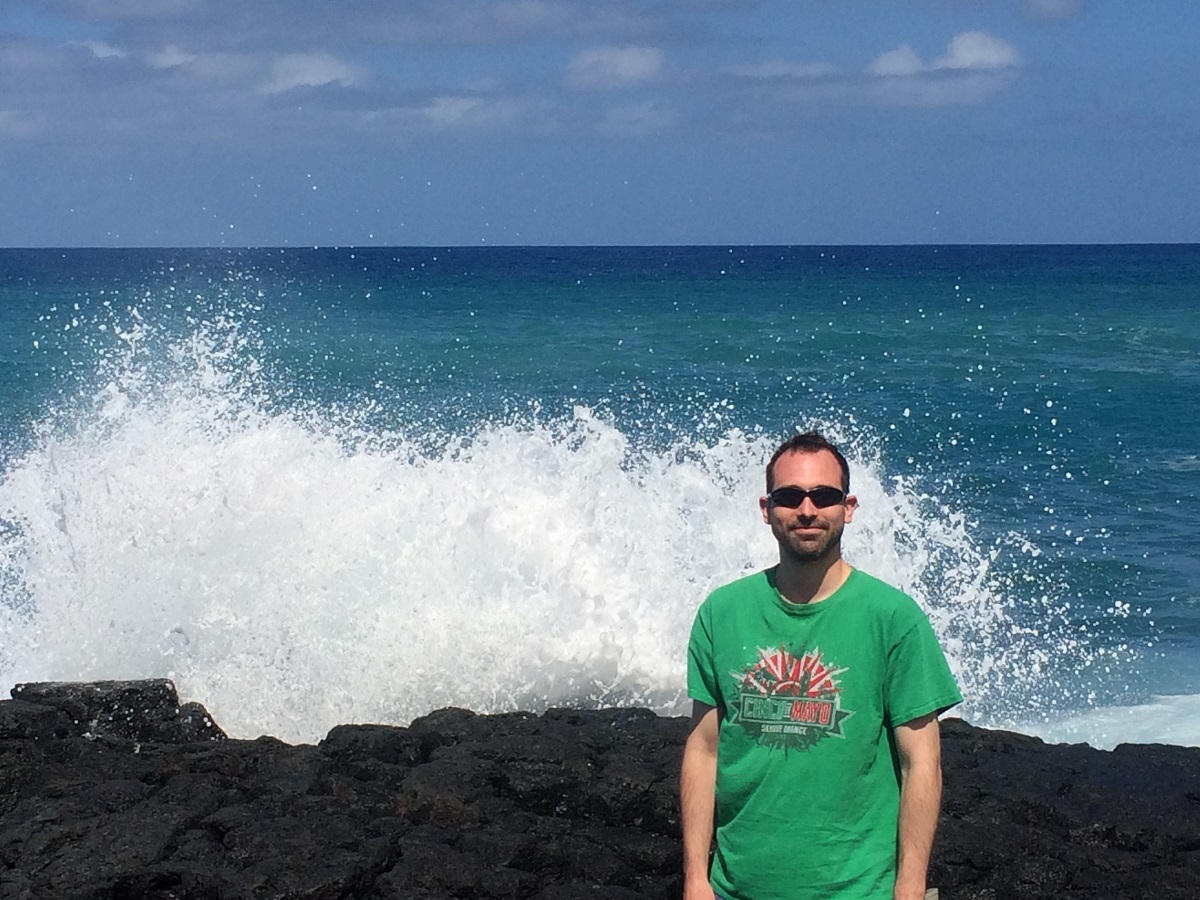 After a stop at McDonald's for coffee, we dropped mom and dad off at the Wyndham Resorts office and headed over to Umeke's. Neither of were sure what to order. I ordered the Avo Poke (because I like avocado) with crab salad and Matt got Hawaiian Poke with Cucumber Kim Chee salad, 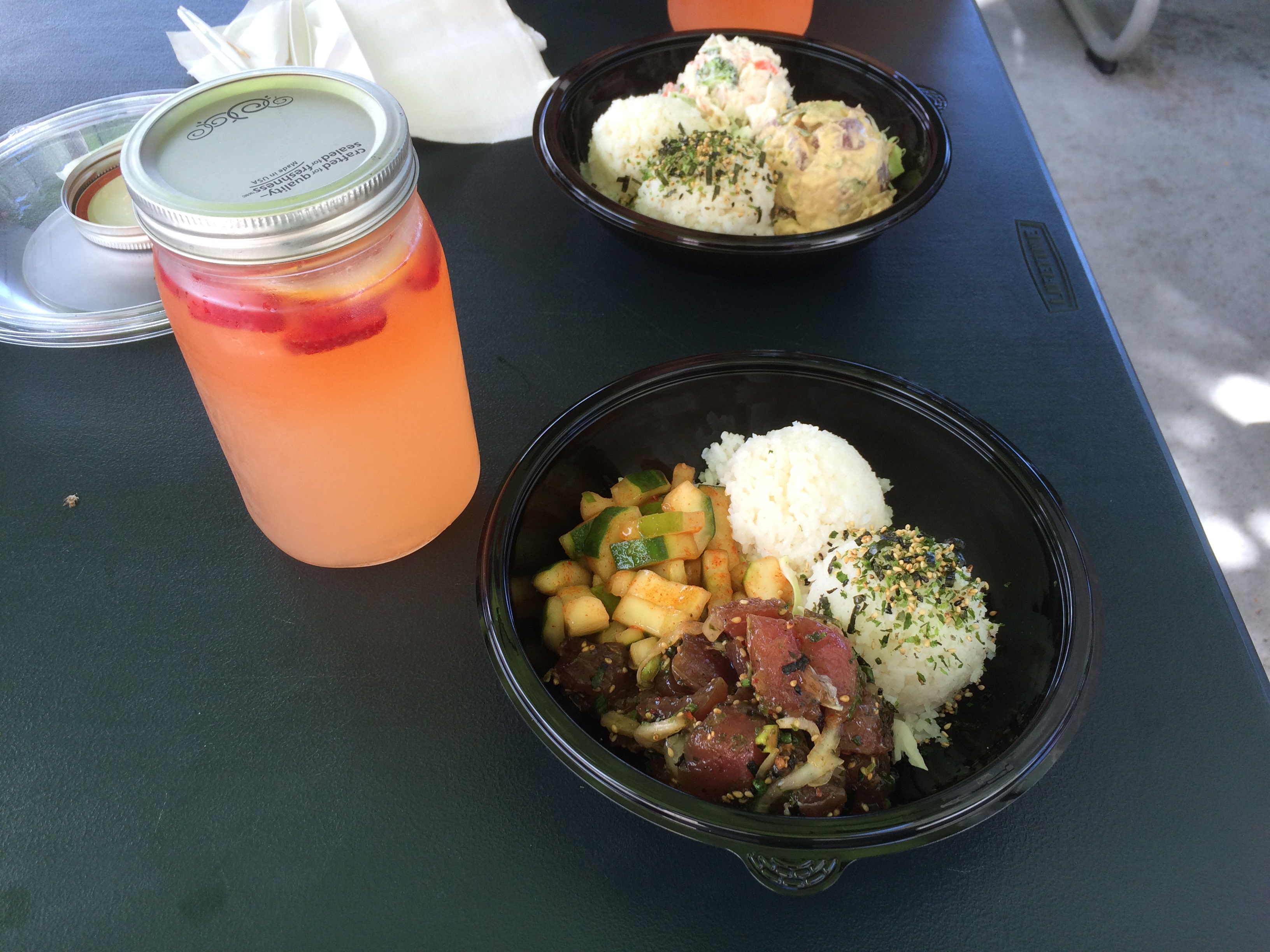 I enjoyed the flavor of both, but I have decided that I don't like the texture of poke. It was sort of mushy like baby food. The salads were yummy, but the biggest hit was the strawberry lemonade! It was the best I'd ever had.

After we finished lunch, we drove the car down Ali'i Drive to see what was there. Matt spotted a man taking pictures of people with four Macaw parrots. He was interested in finding a spot to park so we could get a closer look, but we couldn't find a parking spot. I was anxious about getting back to pick up my parents and he was trying to use every minute of our vacation time doing "something". We ended up butting heads. I figured we could come back later in the trip and check out the parrots and he wanted to do it right then. Since there wasn't enough time, we headed back to pick up my parents.

I went inside and asked the young woman at the counter when they'd be done. She told me that there were no 1 hour seminars and that they'd be another hour. What? I was with my dad when the rep told him it was a 1 hour seminar. If I we (Matt and I) had attended in lieu of my parents, it would have been a 90 minute seminar. As I later found out, this is a common practice with time share programs.

I was very frustrated as we'd booked our flight based on their seminar. She said, "It will only be a short while," and invited me to wait inside the air conditioned lobby.  A short while?  It was 12:22.  A short while is 8 minutes - not 1 hour and 8 minutes. I left extremely irritated with her.

On the plus side, we had an hour to kill - we could go back and see the birds!

We found a place to park and together we walked down to check them out. It was hard to pass up a picture with them - $20.00. 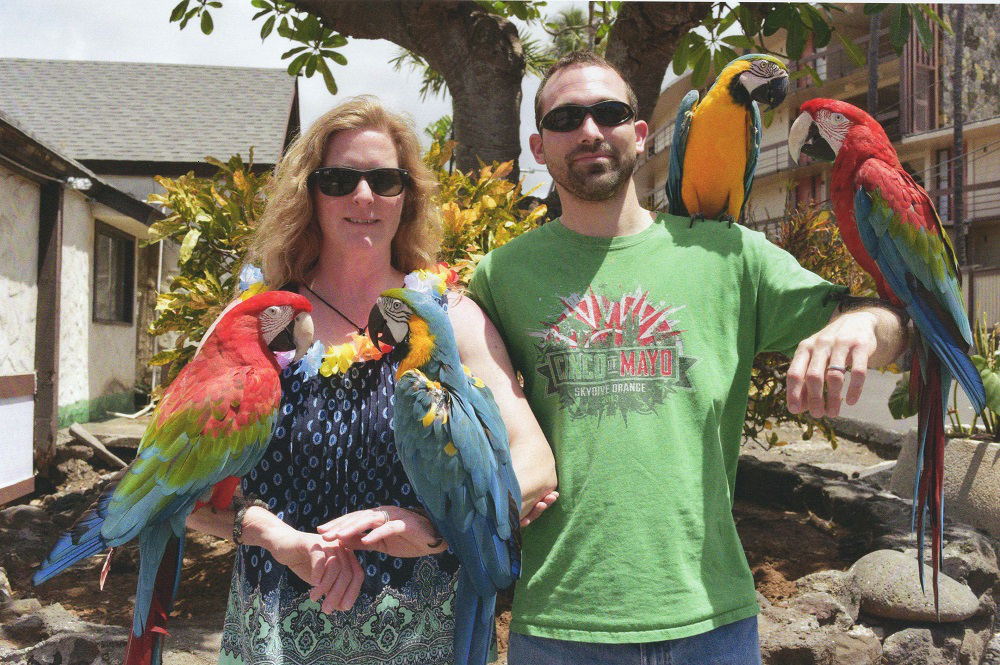 After they took our picture together, the bird owner proceeded to put all four birds on me. One of them was even standing on my head! We ended up buying the second picture for another $15.00. I am pretty sure I will never ever have four parrots using me as a roost again!

We walked up and down Ali'i Drive holding hands. Matt was happy - he got to see the parrots up close!

There were a bunch of little shops as well as some larger ones. For a while, we sat on a concrete wall and watched the waves come in to Kailua Bay. We also got to see some tiny black crabs that looked a little like spiders.

When we got back to the Wyndham building, I was starting to feel anxious about making it through security in time for our flight. At 1:30, my parents were nowhere to be found. However, they did appear shortly thereafter. My mom headed off to the bathroom and my dad had to complete some exit paper work. I asked him if he had gotten his $100. He had not!

The young woman behind the counter said my parents had already received a $100 on the activities. NO they had not! They received the discounts offered on the activities, but they did not receive $100. She left to talk to the manager and seemed to take her good old time getting back.

When she came back, she reiterated her position. That's just not good enough. It's false advertising. I asked if I could have a business card - they didn't have any. She offered to look up the phone number for corporate, but she was taking her time. I had a flight to catch so I told her to forget about it. I could work on getting this resolved when we got back on Thursday.

I was madder than a wet hen when I left there for the airport!